How Tempo Planner could have helped built the Death Star

Readers will remember that in 2016 we wrote a little piece tackling the slow schedule of the iconic symbol of imperial terror. As the years pass and we keep dreaming about the Star Wars Universe, it is only natural we dive deeper into the idea that Tempo Planner would have been the perfect match for the Death Star’s construction.

In Star Wars Episode VI: Return of the Jedi, there is a great scene when Moff Tiaan Jerjerrod, the assigned project supervisor of the Death Star, is faced with the impromptu visit of Darth Vader who informs him that the Emperor will not tolerate any further delays. Jerjerrod quickly mentions that his workers are at full capacity and that the project actually is in lack of resources - Vader seems to think otherwise.

Are the workers truly fully utilized? Is the Death Star in need of hiring contractors and additional teams? Was Vader’s visit necessary?

As baffling as it may sound to hear that a hyper-technologically advanced civilization on the brink of creating an armatized artificial planet struggles with resource management, our theory suggests that this is in fact the case! If we consider that the Death Star has an estimated crew team between 1,186,295 to 1,206,293, the inefficiency and chaos to coordinate the project without the proper tools would be overwhelming and result in major delays; no wonder Vader is paying a visit... 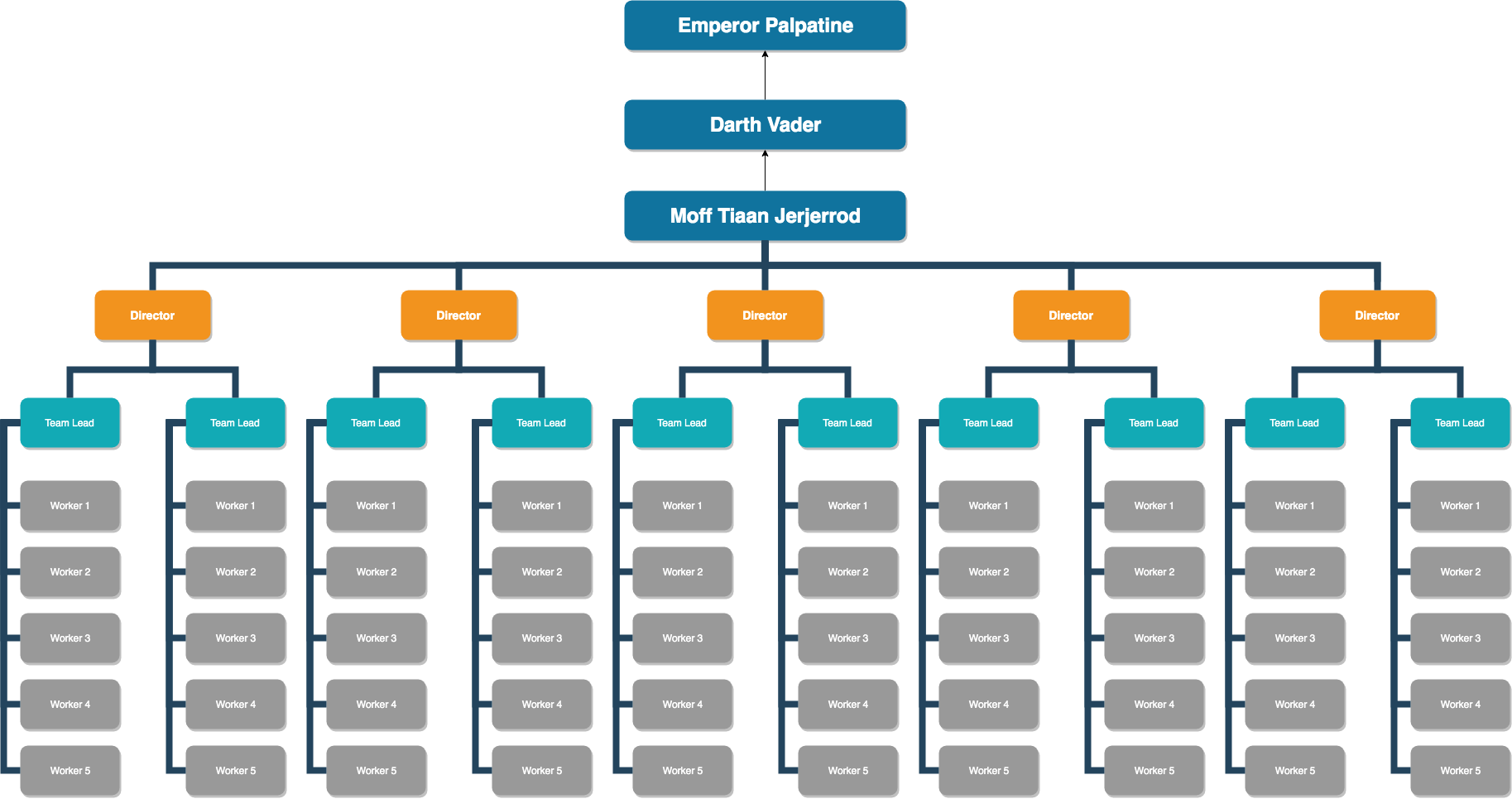 Without the proper tools to oversee the utilization of some teams, Jerjerrod has no way to accurately identify if some teams and workers go underutilized while others are crumbling through all the work they have to do (departmental silos, lack of transparency and visibility, etc.). His way of acquiring information on that matter is limited to the information his directors give him.

As a result, the project could be placed back on track by optimizing the workload of the employees, and if needed to add additional team members to match deadlines.

Vader claims that he can increase the work done by the workers and expedite the project. Maybe by using the force, he’ll be able to identify teams that are underutilized… Alternatively, he could go with a sure-fire and instantly discover that information at a glance through the resource planning view of Tempo Planner. 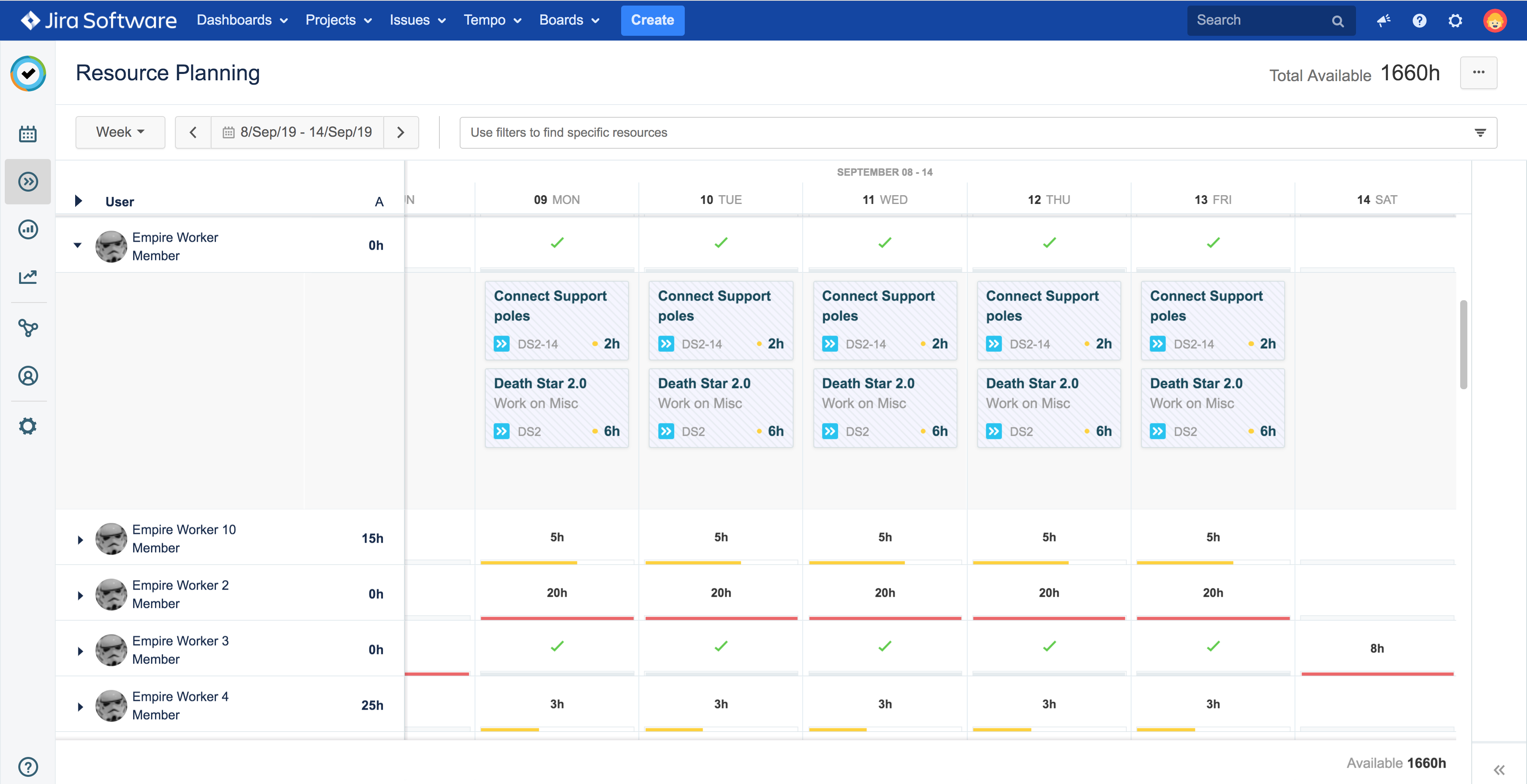 As can be seen from the Resource Planning view above, Vader’s hunch was correct:

Vader could also decide to dive deeper into the data by filtering the information by roles, users, or teams.

For example, it appears that the Wookies, whose role is to assemble the structural framework of the Death Star, are being heavily overused. With their role in high demand, the information from the resource planning view could help management detect a gap in resources and help them decide whether to hire more Wookies.

Episode 3: Revenge of the team leads

The Emperor, Vader, and Jerjerrod are not the only ones benefiting from the added layers of visibility: team leads benefit tremendously as well. The “Team Capacity” view found in Tempo teams lets them understand whether their team can tackle new initiatives and who could be a prime candidate to do so. By optimizing the allocation of their resources, team leads can help remove some pressure of members who are overworked. 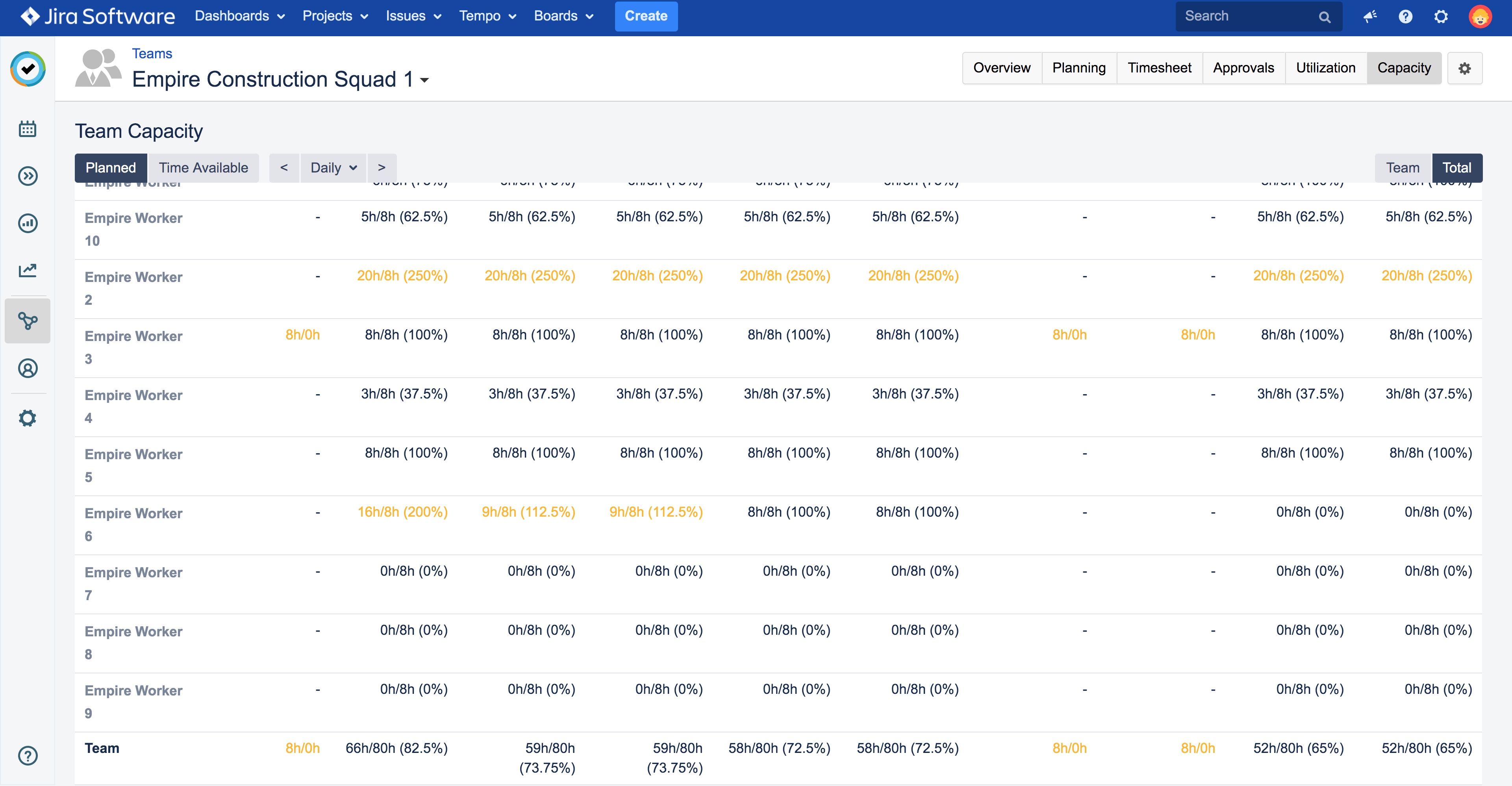 For instance, the Empire Construction Squad is able to see that they have some room left in the bank to work on other activities. Maybe they could lend the Wookies a hand?

With the help of Tempo Planner, the Death Star’s stakeholders are able to quickly identify gaps in their resource utilization and uncover areas where more workers need to be hired to have the Death Star constructed on time. Now, Jerjerrod easily communicates that information to his superiors with credible numbers so that there are no more needs for impromptu visits!

But that’s not all Tempo Planner has to offer! DEISER, an awesome team of consultants, used the force to make Tempo Planner even more powerful for them!

You can read how DEISER leverage the tool for their daily operations.