Automation in Tempo is easy with the help of a tool like ScriptRunner! So far, most of the scripts published in the library will work with any of the three Tempo products (Timesheets, Planner, Budgets), but there is one that is exclusive to Tempo Planner.

If Tempo Planner is a mystery to you, we’re about to change that right now!

Tempo Planner is a resource allocation app for Jira that lets you quickly find available team members and maximize your resource utilization. With it, you’ll be able to boost the efficiency of your teams and simplify your planning process.

Today we’ll go over some use cases and scenarios for this ScriptRunner’s Tempo Planner script. That being said, you can learn to automate some parts of Tempo and Tempo Timesheets in the automation webinar that we did with our partner Adaptavist.

This script uses Tempo Planner, a tool to streamline the management of teams and resources to quickly find available team members and maximize your resource utilization.

As the name of the script suggests, ScriptRunner now has a way to remove some pesky manual labor and automate the process of pulling Tempo plans of interest for a given Jira Issue.

Where does this script shine?

Let’s take the case of Taylor, a team lead for Rougetech. Every month, Taylor and her team get together for their monthly planning. In it, they plan time for each team member on the tasks that they must do.

In other words, her current steps to see the total plans for the next 4 weeks are as follows:

In your Tempo Planner page, you will have the possibility of filtering the view to your team. The capacity of the team and the individual members will be displayed for the determined period.

After the planning has been completed, Taylor will be able to revisit an issue to see who all the collaborators are, and quickly calculate the total time planned to see if it matches her initial prediction and budget.

The issue “Have Fun!” showcases all the planned time under “Collaborators”.

That being said, this is slightly tedious for Taylor because of the following:

On the surface, this might not seem like much and it could end up simply saving 5-20 minutes per issue. But, lets not forget the following:

This repetition of a mundane task could also be a widespread practice throughout the whole organization. Other team leads could be following the same practice (especially if it is standardized), meaning that the company is losing hundreds, if not thousands of dollars on such a little thing.

In other words, the script does the following:

But the use case does not limit itself to monthly planning!

There are many other scenarios where this script can save precious time for the end user and the organization.

For example, a manager in a consulting firm could be looking at the staff's planned hours for a client’s issue to ensure that for a given time period, the time planned does not exceed the contractual agreement with the client. If it does, then the firm can let the client know that they will charge extra.

Or if for example people were logging time on an off-site issue (such as meeting clients or being on the road), then it would help a manager quickly understand how much time his team is spending off-premise, and help determine the remaining capacity of his team for a predetermined time frame.

How do I get my hands on the script?

The beauty in this partnership is its simplicity. 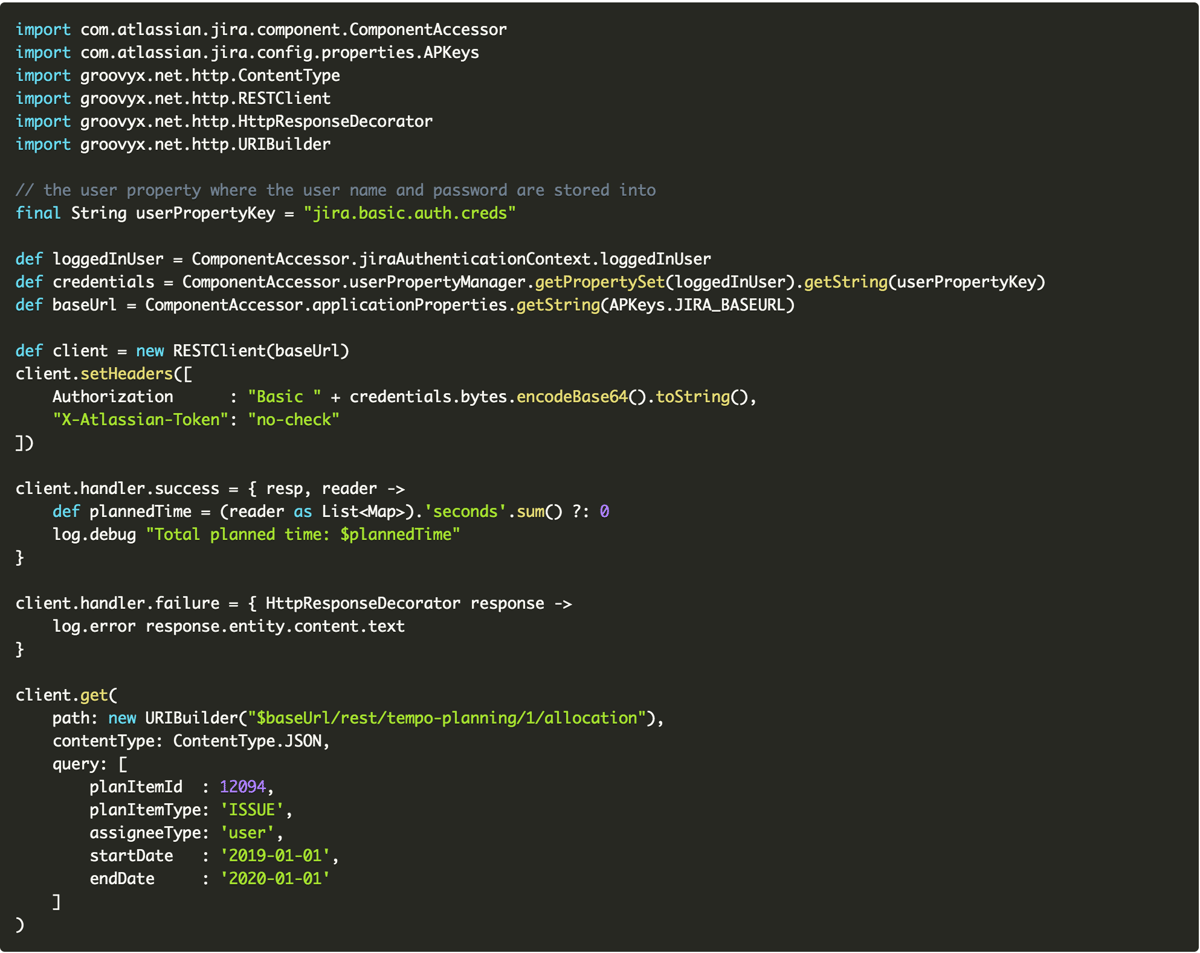 All you have to do is to copy-paste the script in your ScriptRunner terminal and tweak the variables to your use case.

Today, we quickly went over one of the newly published scripts made by the Tempo-Adaptavist partnership for Tempo Planner and some scenarios in which time could be saved through automation.

More scripts have been recently published in the Tempo-Adaptavist library. One way to learn more about those scripts would be to watch the automation webinar “Save time with Tempo and ScriptRunner automations”. You can view the webinar here.