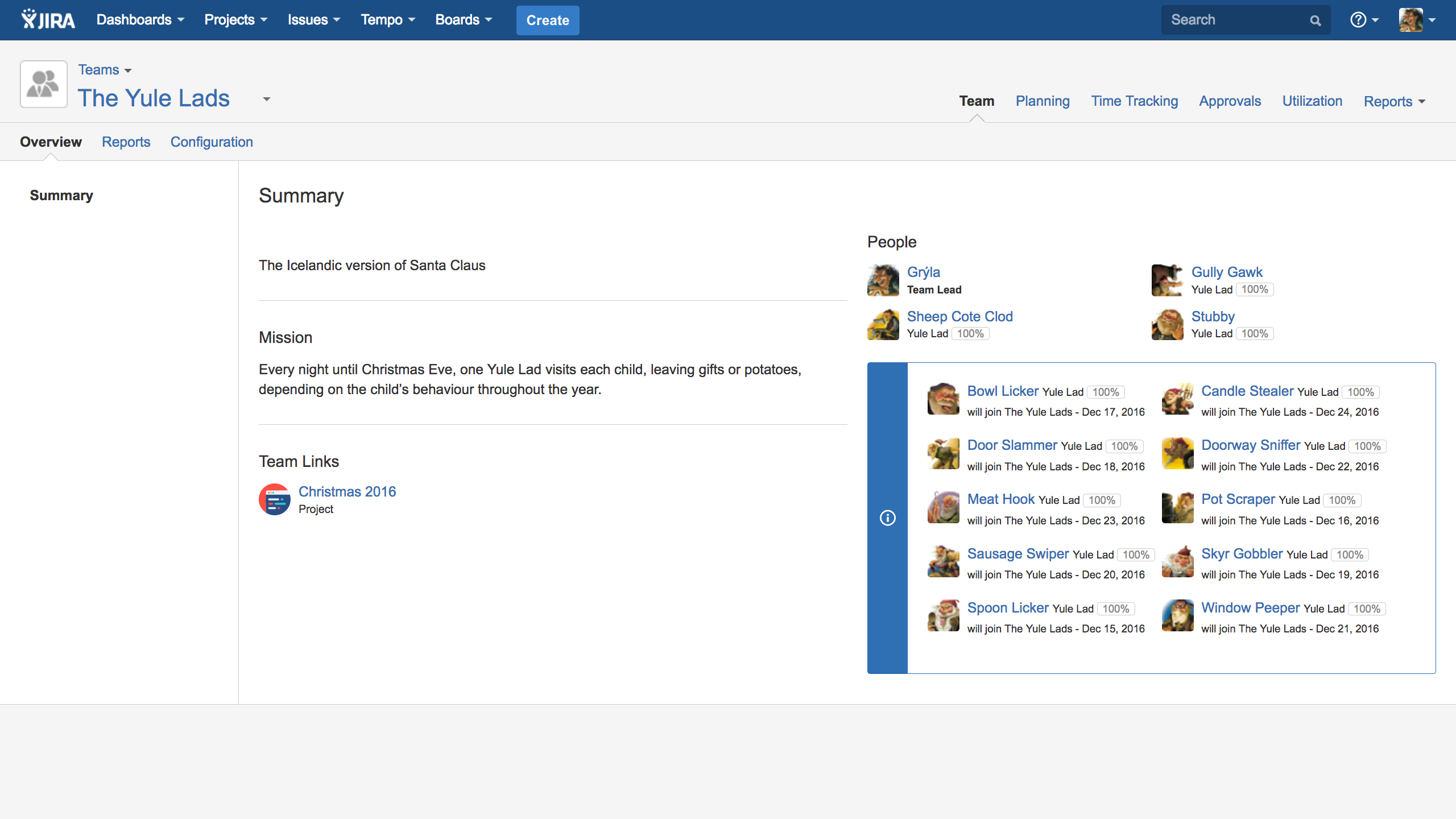 When it comes to Christmas, Icelandic children are often told the story of Grýla, an ogre living in the mountains far away. Some believe she's a terrifying character who is half animal and half troll, and always in search for children who have behaved badly to boil in her giant cauldron.

[callout class="user"]Grýla has 13 mischievous boys also known as the Yule Lads, and a husband named Leppalúði. Unlike most countries with a single Santa Claus character, Icelandic children are visited by the 13 Yule Lads instead.[/callout]

Every December, Grýla will make a trip down from the mountains in search of misbehaved children while her sons will follow suit–one at a time– to pay them a visit. .

Children will place a shoe on the window sill on December 11 to prepare for a visitation by the first Yule lad, Sheep Cote Clod (Stekkjastaur). Most children, however, prefer having their shoe placed in the livingroom or kitchen instead of their own bedroom.

The Yule Lads take turns to visit them every night and leave sweets or small gifts in their shoe. If the child has been behaving badly, they would then receive a potato in their shoe instead of treats!

Grýla has found herself, too often, behind schedule and over budget every Christmas. Not this year though. She decided to use Tempo for JIRA to be more organized and help her sons work smarter, visualize all resources better and tasks, stay on budget with all the gifts, manage the whole team of Yule Lads centrally, and report on time spent on tasks.

Set up and manage team centrally with Tempo Teams

To start with, Grýla created a project in JIRA, called Christmas 2016. Next, she created issues to scope out the amount of work that needs to be done.

To make it even easier for her to manage, she adds a team of all the Yule Lads to have a visual overview of when they will come down from the mountains - and links the JIRA project to her new Tempo team.

The team overview page above shows that each Yule Lad has a distinctive character name and they do behave in that manner.

With Tempo Planner, Grýla can confidently estimate the amount of work the team can deliver within this time period. She can easily plan work for the Yule Lads ahead of time, and when each Yule Lad joins the team from the mountains, based on the team member timelines. 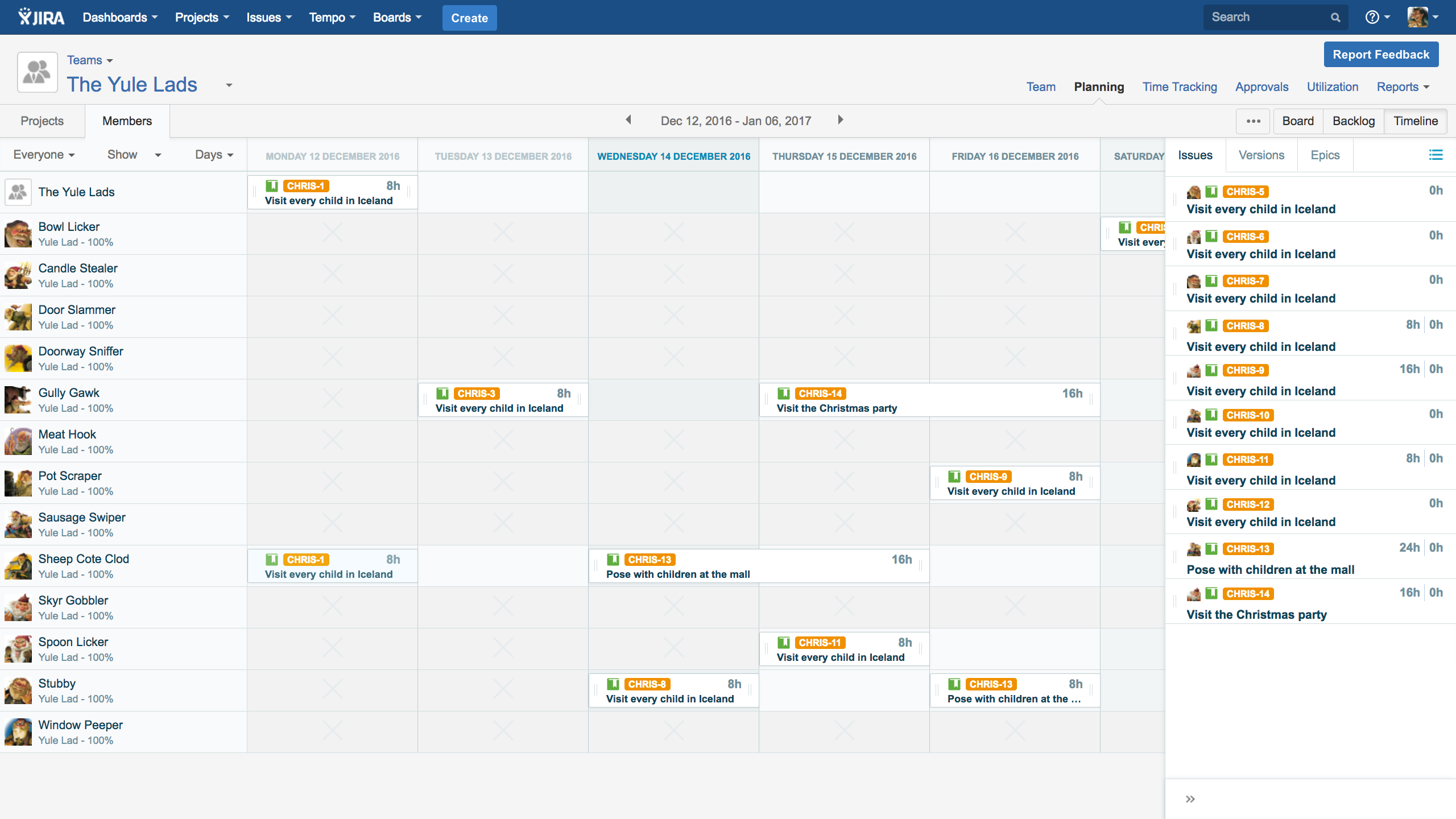 It’s important for Grýla to ensure that resources are being managed as efficiently as possible, since this is a time sensitive project that has a delivery every day. She also needs to be careful not to over or under-allocate work to team members.

As the Yule lads log their work with Tempo Timesheets on issues within the scope of the project, those work logs are automatically converted to actual costs based on the cost rates of the team members in real-time. 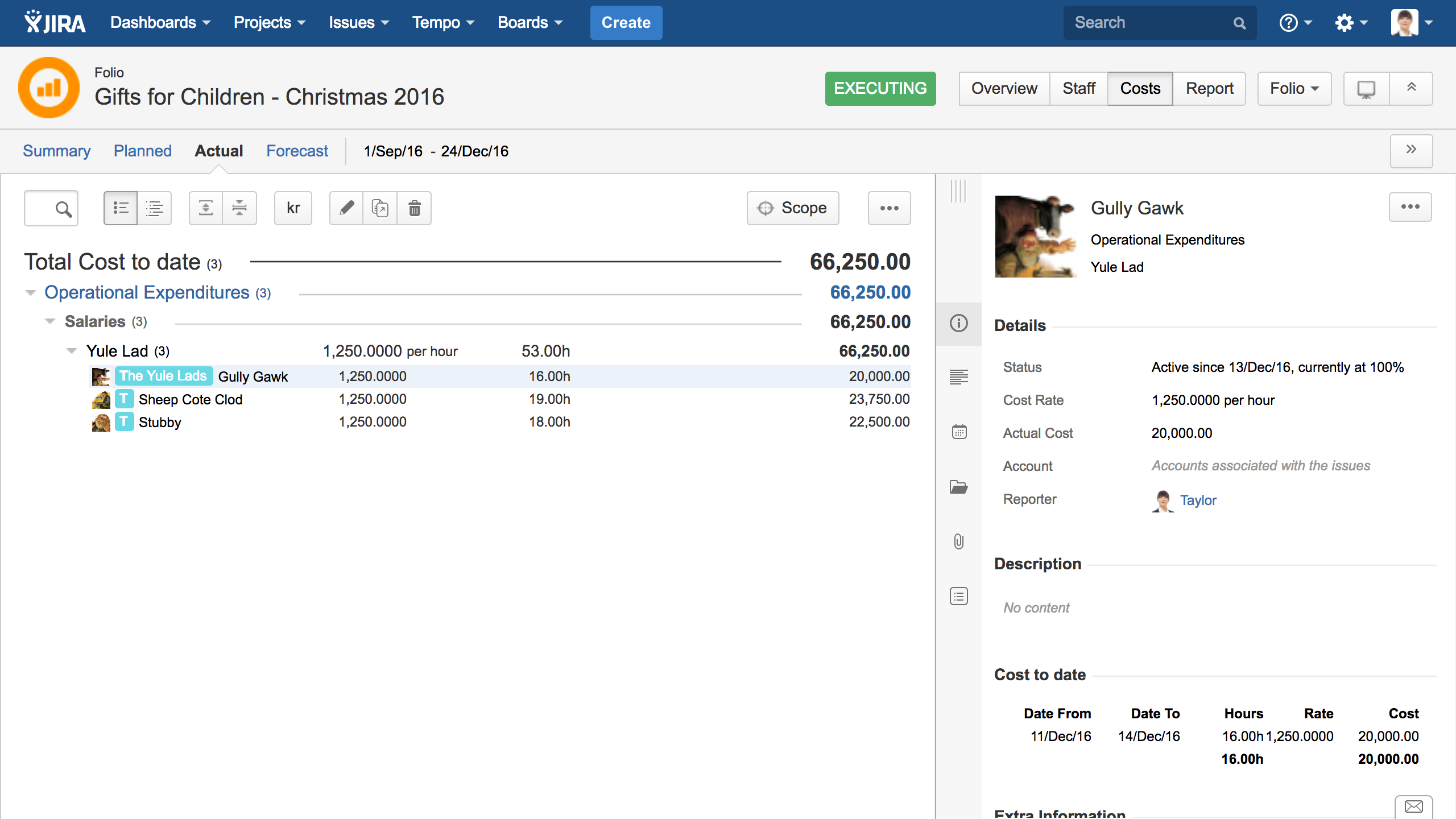 So far, only three Yule Lads have traveled from far away to visit the children as shown above.

To get an accurate overview of how much time is spent on tasks related to Christmas 2016, travel time, and to compare between the Yule Lads how long it took them to visit every child, Grýla uses Tempo Timesheets to report on all resources and activities. 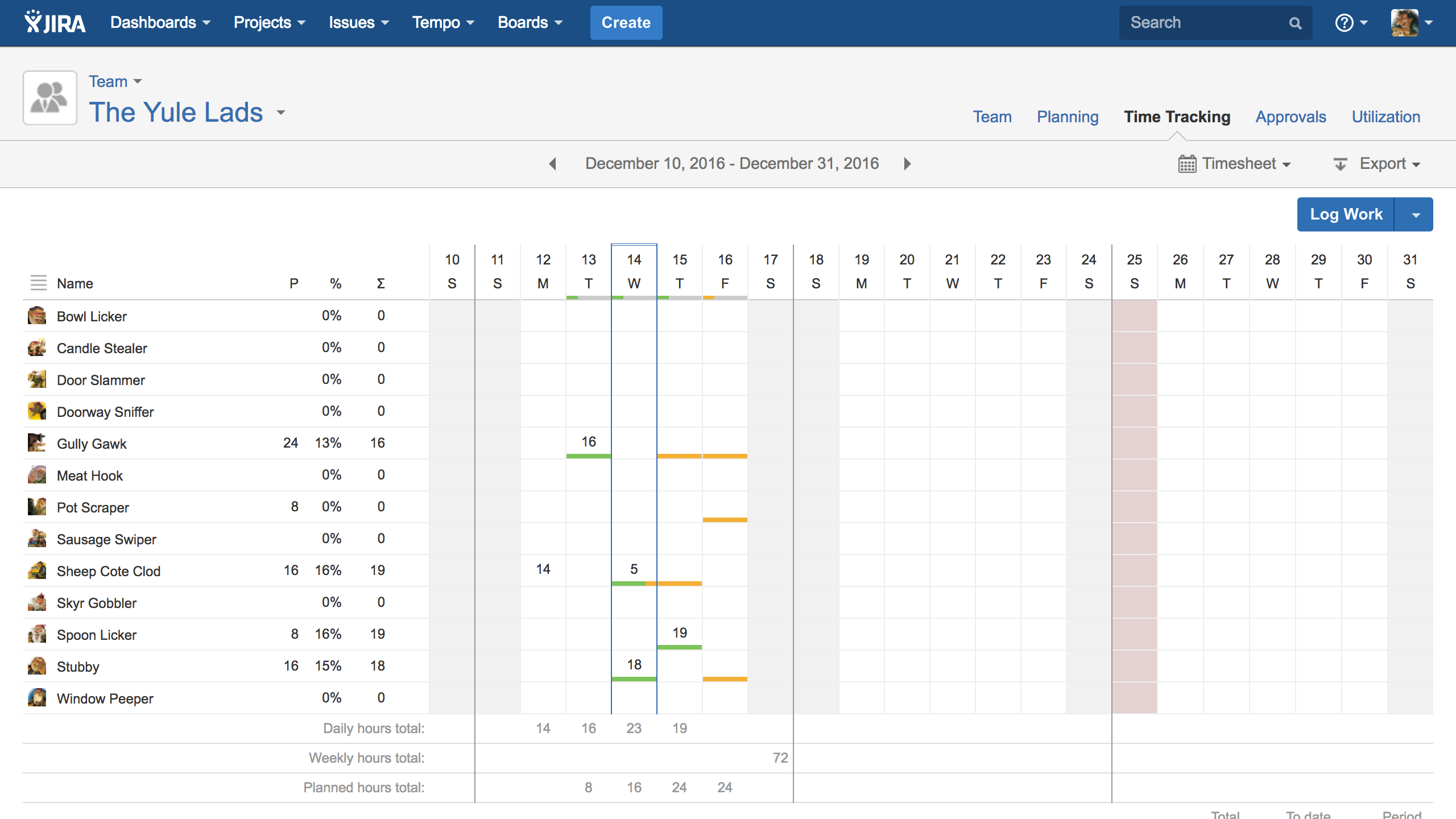 This allows Grýla to have a good overview shown above of how much time it really takes to do things, for instance travel from far far away, visit every child in one night, and pose with all the children at the mall in one day.

It was no easy feat!

Track your time on the go with Tempo Mobile time tracking

All of the Yule Lads can painlessly track their work on JIRA issues on their mobile - since they are not equipped with computers like Grýla is. 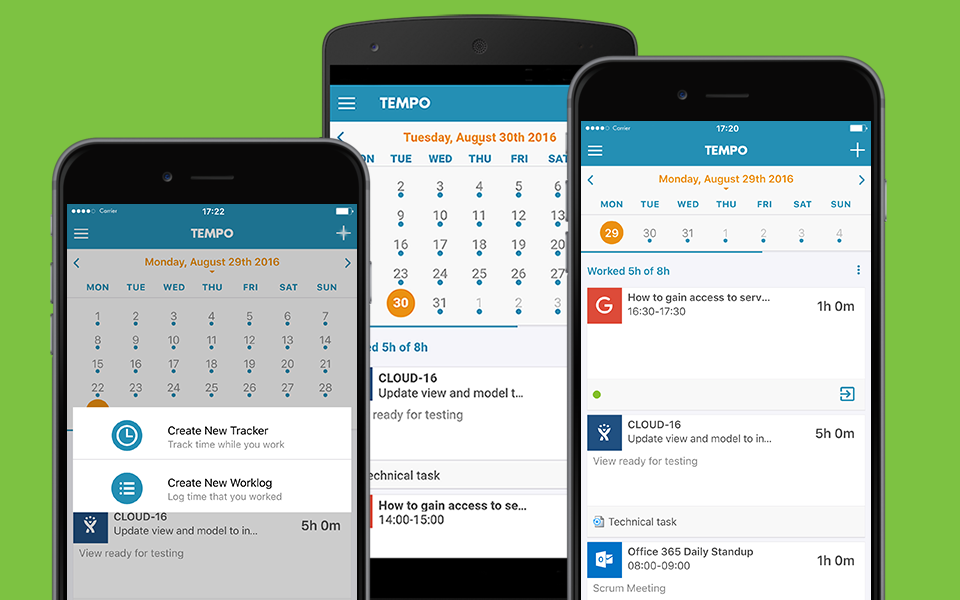 Work smarter with Tempo for JIRA

The Icelandic Christmas characters are a fascinating mixture of traditional folklore and a way of teaching children to behave better. But Grýla as a team leader and a manager (not a terrifying character to scare children), wanted to be more efficient, on time and budget, and promote more transparency among her stakeholders chose to implement Tempo for JIRA. Also, to keep her team members happy. Try Tempo for JIRA today - get your 30-day free trial of Tempo products.

Get more out of your Tempo trial